Giganta first appeared in Wonder Woman #9. She was an ape that the evil scientist Dr. Zool transformed into a bad tempered strong-woman. The current Giaganta has been revamped as Dr. Doris Zeul, and first appeared in 1997. This new Zeul captured a comatose Wonder Woman and attempted a mind switch with our beloved Amazon. Fortunately Wonder Girl saved the day (those teens were good for something). It appeared Zeul was dead, but her "self" was in her machine. Her assistant transferred her to a gorilla named Giganta. They then captured a circus strong-woman named Olga so that Zeul could be human again.

Giganta's ability to change size was apparently an invention of the Super Friends cartoon, likely to make an enemy for Apache Chief. This ability is carried on in Justice League Unlimited. Wonder Woman #1 vol. 3 explains that Olga had this ability when Zeul took over her body. 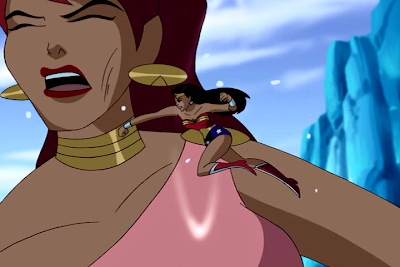 Wonder Woman slugs Giganta in JLU episode "A Distant Shore"
Much of this information gleaned from The Wonder Woman Wiki.
Posted by Darius Whiteplume at 7:07 PM