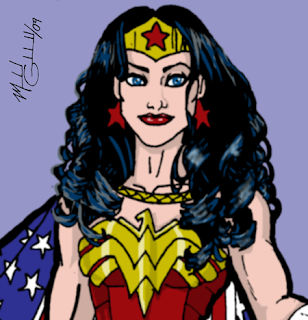 All You Wonder Woman Fans Out There!
As you may or may not know with issue #45 of her current series Diana will be celebrating her 600th issue in print. They've relaunched the title twice which is where the number confusion comes from. DC Comics recently retroactively renumbered Superman's "Action Comics" to honour his status, and Marvel Comics has done the same with their recent reboot of "Thor". It's time Wonder Woman got equal treatment. Take a look at what Dan DiDio had to say about it and if you're willing to send him a postcard please do, he's said all he needs are 600 so try and do your part and if you know anyone else who might want to help support equal rights for female comic book characters forward them the link.

Thanks in advance for your support of Wonder Woman, an iconic character who is the only female character to have maintained her own eponymous monthly title since 1941 and should be accorded the same respect and publicity as her counterparts Superman and Batman.

Posted by Ghirdietus at 5:35 PM