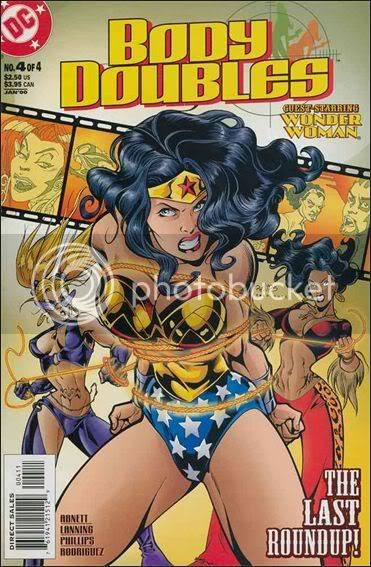 The Body Doubles are a duo of assassins made up of Bonny Hoffman (the daughter of a mob boss) and Carmen Leno (a former porn-star). They first appeared in Resurrection Man #1 (March 1996).

DC did a four-issue mini-series in which they were hired (read "conscripted") by an alien empress, the Mystress of the Rhormorid, who has a method of extracting the youth, beauty, and powers from creatures. She wants The Body Doubles to bring her Earth's most powerful meta-humans. They defeat the likes of Argent, Deep Blue, and Power Girl, and in the fourth installment try, and fail, to bring in Wonder Woman.

This mini-series is a cheesey, fun romp full of scantily clad heroines and the occasional boob-joke. The artwork is decent, the story is humorous; it is not a serious comic book. If you see it in the bins at your local shop, they are worth the read.

Some info from Atomic Avenue
Posted by Darius Whiteplume at 4:29 PM