Hi. My name on the interwebs is Sun and Heir and I do a little blog called Knight and Stars. Knowing of my love of comics in general and Wonder Woman in particular, Darius was kind enough to issue me an invitation to contribute here. Real life has conspired to keep me from it until now, but I reckoned a proper way to start was by introducing myself. 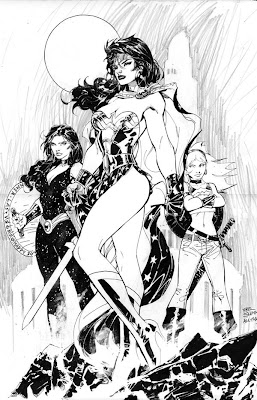 This is a Jim Lee sketch done in 2007 at a Con
I'll be dropping in from time to time to post a pic or comment on an issue or just share an anecdote about everyone's favourite Amazonian princess. My first two real crushes as a boy (geez this shows my age) was Linda Carter as Wonder Woman and Julie Newmar as Catwoman. 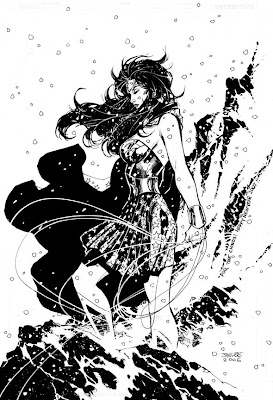 Another sketch from Jim Lee of Hippolyta this time, circa 2006
Just to keep things from getting too terribly serious around here I'll also be posting certain covers that make me smile. Most people know that the creator of Wonder Woman was William Moulton Marston and that he was an inventor of some of the bits that are in polygraphs, he lived with both his wife and girlfriend and was a psychologist. Now, it was WMM's wife, Elizabeth's idea to make his superhero a woman and he truly wanted her to be strong and independent. However he worked something into WW's origin that he enjoyed as well: 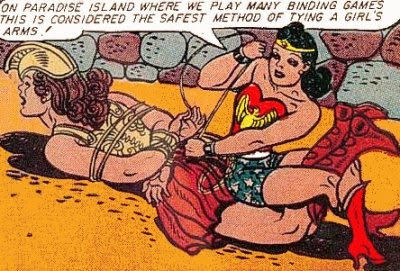 Marston had to have some sort of "kryptonite" for his Wonder Woman and he chose that if Diana was bound by a man she would be utterly powerless. So began the "Bondage Covers,*" of Wonder Woman. When I worked in a comics store we could automatically raise the price on a back issue of Wonder Woman if she was bound in some way on the cover. 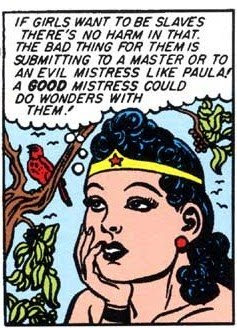 No one says it was right or terribly nice, but it continues to a degree to this day. Even though this part of her origin has been completely tossed, bondage WW covers outsell regular covers almost 3 to 1. I myself happen to find them humourous because of the way DC did them in plain sight without anyone "seeing" them for what they were. Especially after the Comics Code went into effect. 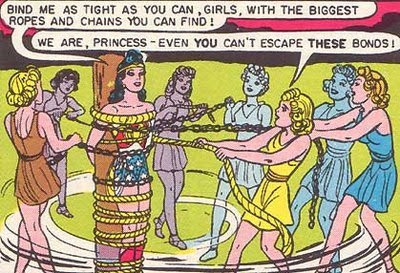 As I said earlier, this will only be an occasional thing along with my other contributions. I look forward to meeting all of you I don't already know.

*Suffering Sappho I hope everybody takes this post with a wink and a smile as it's meant.
Posted by Unknown at 9:33 AM