One of the most prominent versions of Wonder Woman in recent history has to be her Justice League Animated appearance and the subsequent action figure representations released in conjunction with said appearance. 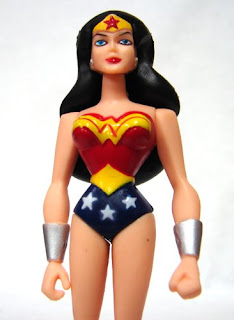 This figure has been released and re-released about a dozen times now, and any fan of the action figure series likely has two or three laying about due to the constant multi-pack addition of our favorite super-heroine.

This later release came with a clear stand, which is pretty much a necessity if you want her to stand upright. 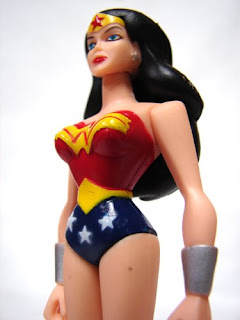 Based on Bruce Timm's designs for the cartoon series, this Wonder Woman is a very simple action figure (limited pose and POA,) but beautiful nonetheless. 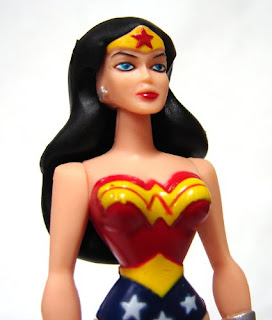 If you don't already have one, don't worry. She's stayed in heavy rotation in the Justice League action figure series for what seems like decades now, and she is sure to either be on a shelf somewhere or on her way back (now exclusively at Target) real soon!
Posted by Bubbashelby at 5:12 AM