Comic Con sketch By Amanda Conner found on Flickr.
Posted by eyemage at 8:31 PM No comments:

Stolen from Geek Orthodox, which just reached its one-year blogiversary. 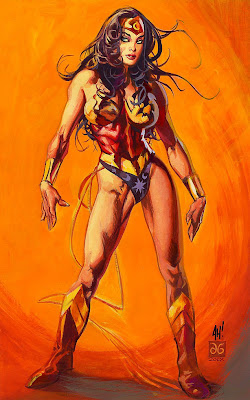 Illustration by Joey Mason.
Posted by Michael May at 8:49 PM 1 comment:

It's too late to buy this custom-made shirt from SmarmyClothes, but at least we can still look at it. Very cool.
Posted by Michael May at 10:47 PM No comments: 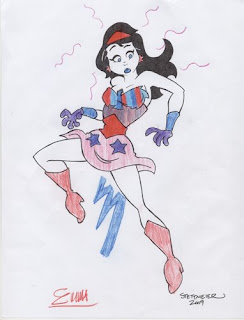 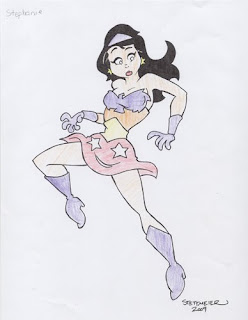 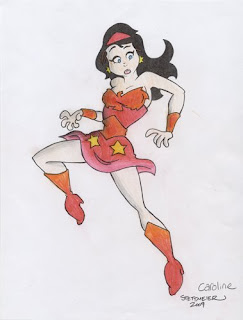 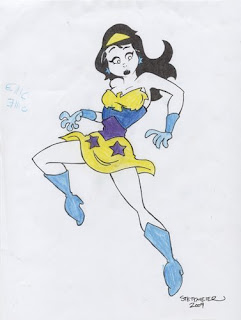 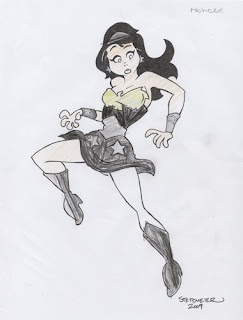 Posted by Bubbashelby at 10:45 PM No comments:

Here are a couple of awesome images from a kids comic that apparently never got off the ground at DC. Rich Johnston spilled the beans on it back in September only to discover that DC's never scheduled it. I'm still hoping that it eventually comes out. My son and I were crazy excited when we heard the concept and saw the art.

More images in that first link.
Posted by Michael May at 9:23 PM No comments: 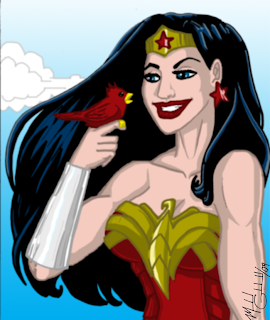 A New Contributor on the Way

Hello all! We have a new contributor on board, Ghirdietus of What Not to Wear: Superheroes, where the first post was about WW. Looking forward to some art and commentary.

As for me, I have been taking a beating lately. Glad to see we still have some action here and welcome to all the new followers. If anyone is interested in contributing, please let me know.
Posted by Darius Whiteplume at 2:39 AM 1 comment:

Another blast from the past, but we need these pictures on the blog. NEEEEED!

Postmodern Barney's "The Many Moods of Wonder Woman."
Posted by Michael May at 7:25 PM 1 comment:

Trying to be Wonder Woman

Whenever I'm looking around for Wonder Woman stuff on the Internet, about two thirds of it is actually about the comic book character. The other third is women who use Wonder Woman as a term for women who "have it all" and "make it work." They're trying to balance the career, the kids; all that jazz.

I might get myself into trouble here and I certainly welcome feedback on what I'm about to say, but I think it's sad for a couple of different reasons that Wonder Woman is used that way. First, I think it's sad that career women with families (there's probably a better term, but hopefully you know what I mean) feel like they're the ones who have to make it work. Isn't it horribly outdated to think that only the wife has to balance her career goals with children? Where are the husbands while their wives are comparing themselves to a superheroic ideal?

Secondly, it's sad because Wonder Woman isn't a career woman with a family. She not only doesn't have kids; she's not even in a serious relationship where she has to balance someone else's needs with her own. She's a beautiful role model for women who need to have more confidence in themselves, but she's got it frickin' easy when it comes to "having it all."

Having said all that, Susanne Middelberg has a great photography gallery that includes photos of models dressed as Wonder Woman and the Flash trying to live everyday lives. I like it because it includes Dads, who ought to be just as harried and frantic as their wives.

It's all very tasteful and artistic, but I still feel like I should mention that there are naked people in the link.
Posted by Michael May at 8:52 PM 3 comments:

Wonder Woman as a Sex Object

I'm going to start re-posting some more Wonder Woman articles from my other blog just to get them all here where they belong. I'll do some minor editing and updating where needed.

I wrote this first one when former Wonder Woman writer Greg Rucka got upset about Playboy's featuring Tiffany Fallon in a painted-on Wonder Woman costume. The pictorial may be old news, but the issues it raised are still relevant. What Rucka said about it was, "You've no idea the damage you've done. No idea at all."

And he may be right. But not according to Steven Grant who wrote about that same time, "We're talking about Wonder Woman, right? Bazoongas out to here, skintight costume, high heels, bare legs and emphasized crotch, slave bracelets on her wrists Wonder Woman. Right? The Wonder Woman whose creator intended her to warm girls up to the joys of freedom via bondage and submission, right? If you think Wonder Woman is a role model, bodypainted nudes are about the least of your problems... "

My take on it is falls somewhere between the two. I think Wonder Woman is a role model for girls. That doesn't mean I think little girls should go out and start dressing like her; it's Wonder Woman's attitude and confidence that I wish more girls -- hell, more people -- would try to mimic. It's that same confidence that allows her to wear that costume without giving a crap about what anyone else thinks about it.

But in response to Rucka's post title, "Either You Get It or You Don't," I guess I kind of don't get it. Someone explain to me how a Playboy Playmate's imitating Wonder Woman hurts Wonder Woman's image or impact as a role model. Yes, it's sexist. Yes, it's completely focused on Wonder Woman's attractiveness.

But to Grant's point, Wonder Woman has always been attractive. That's an undeniable aspect of her character. And as far as her being the perfect role model for girls goes, it's a flaw. Sure, it's a lot easier for Wonder Woman to be as confident as she is. Just look at her. I don't see how the Playboy pictorial changes that. It overemphasizes one aspect of her character to the neglect of the rest, but it doesn't ruin her effectiveness as a role model any more than her unchanging attractiveness already does.
Posted by Michael May at 1:09 AM 1 comment: