Listen to Giganta when she speaks so bombastically

This high school English class had to convert Country songs into Wonder Woman songs. The results are fun and cute.
Posted by Michael May at 5:01 PM No comments:

Email ThisBlogThis!Share to TwitterShare to FacebookShare to Pinterest
Labels: music

Maybe she can bunk with Trailer Trash Barbie

I don't want to spoil it by posting a picture. You just need to go see for yourself the Worst Wonder Woman Action Figure Ever.
Posted by Michael May at 5:47 PM 1 comment: 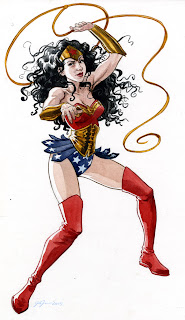 from her twitter
Posted by eyemage at 6:30 PM No comments:

Call off the cards

I haven't seen the official word yet that DC's resetting the Wonder Woman books to their original numbering with #600, but they have said that they don't need any more postcards. Unless I'm missing something, there should be an impending announcement that day will in fact follow night.
Posted by Michael May at 2:41 AM No comments:

Wonder Woman and the Curriculum of Gender

Hello all. My name is Tim Brannan and I am a new contributor here. Normally I blog about witches and horror, but Wonder Woman has been a favorite of mine for as long as I can recall.  Here is a piece that I have been working on for my day job as a curriculum designer.

One of the more interesting books I have been reading is "Wonder Woman: The Complete History" by Les Daniels (2000) and a related documentary "Wonder Woman: A Subversive Dream" (2009, Warner Brothers). I am struck by the parallels between the creation of this comic book character and some of our discussions on gender and public curriculum. Some of these parallels were in fact intentional by the comic's creator William Moulton Marston, a Harvard psychologist.

In 1940 Prof. Marston wrote a pop-ed piece in Family Circle called "Don't Laugh at the Comics" in which he stated that the comic books of the time, read predominantly by pre-adolescent boys and then later service men, were a source of great educational material. He made the claim in this article and in a follow piece two years later that the comics were a great morality tale in which one could educate the masses in "good moral behavior". As mentioned before William Marston was a Harvard psychologist who, among other things, wrote articles on child care, education and even invents the lie-detector (and early proto-type). While most other creators and comic book writers were barely high school educated; not that this matters, but it is a stark contrast. Marston was a critic of comics, till he began to read them. He then decided that he needed to create a comic that conveyed the stories of myth and Greeco-Roman culture as well educate readers on this as well his other ideals (detailed in a bit). In an oft-quoted tale Marston told his wife Elizabeth (also an educated, liberated woman) what he was planning to do, she paused and said, "fine. But make her a woman." This of course was part of Marston's larger plan, to teach people that women were the superior gender and that the world would be a better place if they were in charge. In his 1943 follow-up in The American Scholar Marston points out that he planned Wonder Woman as something for younger girls to look up too as well. That girls "didn't even want to be girls as long at the female archetype lacks strength and power…"
In December of 1941 Wonder Woman, previously called Suprema, appeared on the stands in All-Star Comics #8. She appeared again a month later and by June of 192 she had her own headlining title (Wonder Woman #1), a time line unheard of in those days. Despite a brief reboot, the series has never been out of publication. Unlike her co-heroes Superman and Batman, Wonder Woman was a Goddess. Marston wanted to be very clear that his hero is not an alien or a man driven by revenge but a superior Goddess. He states throughout "Complete History" that the Goddess choice was intentional to equate the woman of the 20th Century as Goddesses. Still he has Diana/Wonder Woman, go through the classical Hero's Journey. She earns her place in this tale because she is better than the others.
Wonder Woman is also of princess of the Amazons, which were the archetypes of female warriors and "those on the outside". The amazons were self-reliant, peaceful, though could be warriors when needed, and all skilled at fighting. Yet despite the fact that Wonder Woman is faster, stronger and more skilled at battle, her mission (and Marston's) is one of love and peace.
Curriculum of Non-Violence and Love

What was Marston's plan, his hidden curriculum? As it turns out his curriculum is not so hidden, at least in his mind. Marston had been DC Comics (then called Detective Comics) Educational consultant. He took his knowledge of how people read comics and his own feminist viewpoints (some of which may seem a bit skewed by today's standards, ie women are not equal to men, they are superior to men). He was very open about what he had planned on doing. Present a character that can be admired by both boys and girls, give her a strong background in the classics, show that she has traditional feminine qualities (beauty, compassion, empathy) but is as strong and wise as any of the Gods and Goddess in her own background. Wonder Woman cared. Her first mission was one of returning wounded pilot, Steve Trevor, home and to help improve diplomatic ties between Paradise Island and "The World of Man". In Wonder Woman comics produced today a common theme is that the sign Wonder Woman has failed is not whether the "bad guy" gets away (like Superman and Batman) but whether or not she can promote peace and stop war.

He based Wonder Woman's qualities on his own research that lead to his creation of the systolic blood pressure based lie detector. Amazons and Wonder Woman were superior in their peaceful environment due their steadiness. Unlike Superman with his massive strength, flight, heat vision, freezing breath and an array of powers, or Batman and his billions of dollars and high-tech gadgets, Wonder Woman is known for two items, her magic lasso that compels people to tell the truth and her silver bracelets which can deflect any weapon (but most often bullets). These are no accidents or mere comic book constructions, they hold key significance to the psychology of Marston and his creation. The parallels between the lasso and Marston's own early "lie-detector" should be obvious; truth is more powerful than a lie. Wonder Woman's bracelets are a reminder of a time when the Amazons were held in bondage and how they never would again, referencing myth but also the post-suffrage movements of women and their expanded role in the work-place of WWII. The bracelets also represent protection, in a sense it is Marston saying my heroine not only doesn't need weapons, but yours are useless on her too. There is the tie to female-archetype as well, bracelets that stop bullets, earrings that allow her communicate with anyone including animals and a girdle that boosts her own already prodigious strength. The fact that is research assistant Olive Byrne (his other "wife" in a three-person polyamorous relationship with him and his wife Elizabeth) often wore large metal bracelets on each wrist should not be ignored.

Marston even said that all boys and men, not just ones reading Wonder Woman, would willingly follow an alluring woman stronger than themselves. Marston believed that he was luring them towards a more peaceful and non-violent way of life.

In 1972 a feminist of a different type, Gloria Steinem put Wonder Woman on the cover of Ms. Magazine. In that 30 years other comic book heroes had come, gone or been radically changed, partially due to the Comics Authority Code, but Wonder Woman was still recognizable as the archetype, or even icon, she had started out to be. In 2009 I just finished working on a new course called "Culture, Gender, and Power Differences in Conflict", which many of Marston's own curriculum for Wonder Woman is part of the objectives for this course. Understanding how men and women approach conflict differently, how are minorities oppressed in subtle ways that either side may not be aware of. Between these two points we have decades of pop culture references that have influenced and been influenced by Marston's creation. Even saying "Wonder Woman" invokes not just an image of a 6 foot tall Amazon in red, white and blue, but is synonymous with "powerful woman".

It is difficult to measure at level Marston met with success in his original conception of his idea. He certainly created not just a feminist icon, but a feminine one. A lot of what he wanted to see accomplished did in fact happen, though not everything. In the end I am left with two quotes from two very different males about Wonder Woman. When asked about Marston's view of women as superior Playboy founder and former editor and CEO Hugh Heffner said "would the world be better if women were running things? No question about it, absolutely."
When asked about Wonder Woman my 6-year old son said "don't make girls mad, they will kick your butt, best to do what they say."
Posted by Timothy S. Brannan at 4:33 PM 2 comments:

Who says they don't make Underoos for grown-ups?
Posted by Michael May at 10:21 PM 1 comment:

Email ThisBlogThis!Share to TwitterShare to FacebookShare to Pinterest
Labels: Merchandise

I'm not a gambling man and I'm not at all suggesting that anyone run out and play this, but if I were interested in doing a little online gambling, this is what I would play. It's even got the Lynda Carter theme.

The audio doesn't start until around the 34-second mark, so don't adjust your sound levels.

Posted by Michael May at 4:44 AM No comments:

Email ThisBlogThis!Share to TwitterShare to FacebookShare to Pinterest
Labels: Merchandise

This isn't exactly topical anymore, but man, it's pretty cool. Pink Raygun has the stencil for you to make your own next year.
Posted by Michael May at 10:37 PM 1 comment:

By Jessica Hickman.
Posted by Michael May at 11:06 PM 1 comment: