The new, new Wonder Woman costume was spotted last night during the filming of the TV pilot.  It looks like it is now a little closer to getting it. 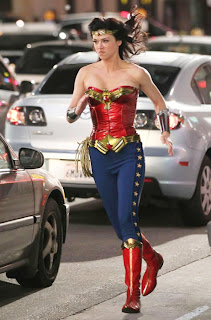 Thanks to DC Women Kicking Ass again for this pic.
Posted by Timothy S. Brannan at 11:12 AM 2 comments:

Today is Lucy Lawless' birthday so here is a special image of her character Xena, fighting a character she did the voice for in New Frontier, Wonder Woman. 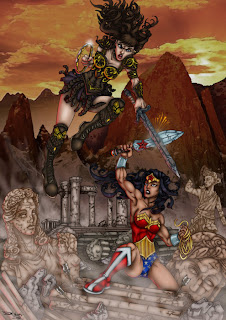 Thanks to DC Women Kicking Ass and Faceway.
Posted by Timothy S. Brannan at 7:36 PM No comments:

Wonder Girls are allowed on this blog too, right? 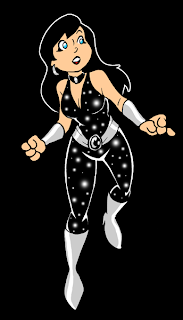 Well I hope so, because I present to you Donna Troy (formerly Wonder Girl) by me via my art blog.
Posted by Bubbashelby at 7:30 PM 1 comment: 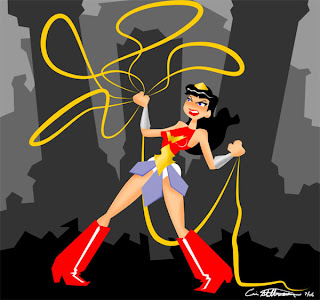 Stumbled on to this old Wonder Woman vector illustration/costume redesign I did a few years back and thought I should share it here!
Posted by Bubbashelby at 9:32 PM No comments:

Tuesday was International Woman's Day and I celebrated with a post of some women from DC doing what they do best earlier in the week.  Here is another all female team-up with Wonder Woman and Zatanna (for my regular Zatannuday post).

A couple of pics from the comic "Justice League of Amazons" from 2001.  Typical end of the millennium eco-friendly story about eco-terrorists or something.   It looks like it was an excuse to show off some skin.

Mind you I have nothing against that. 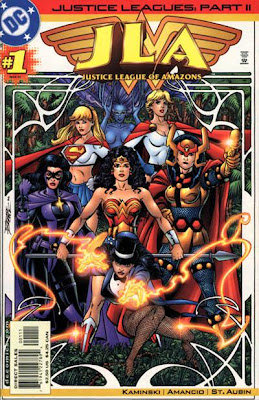 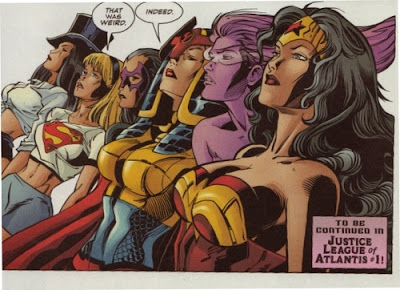 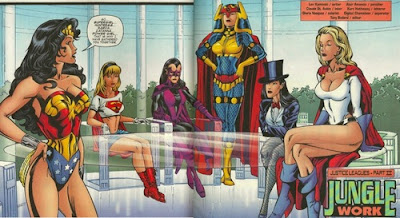 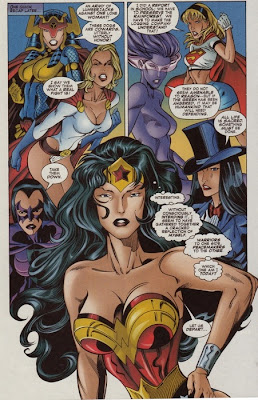 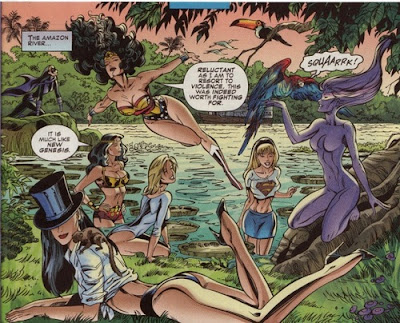 Posted by Timothy S. Brannan at 9:52 AM No comments:

The cover for Flashpoint: Wonder Woman and the Furies #1 is out. 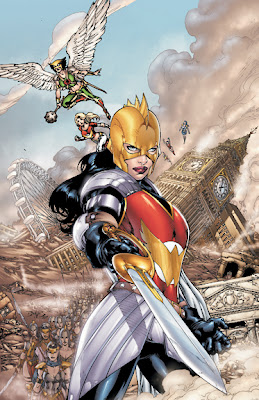 Seriously, how awesome is that?

While I think that is great thing I have to ask why more than half of the population only gets one day?  Shouldn't women get Spring and Summer and men get Fall and Winter?  Anyway I am not here to debate. William Moulton Marston envisioned a world where women would be more highly regarded than they were in his own time (and even than they are now), but failing that at least we can honor his ideals on this day with a picture of his greatest creations.
From the DC Women Kicking Ass and Girls Gone Geek. 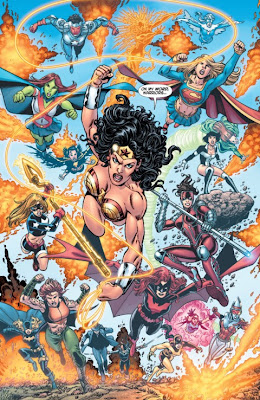 Posted by Timothy S. Brannan at 2:21 PM No comments:

Since Wonder Woman is getting her original look back in issue #609 the awesome site Girls Gone Geek has a pictorial of many different WW costume designs.

Email ThisBlogThis!Share to TwitterShare to FacebookShare to Pinterest
Labels: costumes

Wonder Woman in the Killing Joke (sort of)

Tim: I posted this to my own blog as part of my Zatannurday series of posts, but it also has WW in it so I thought I would share here.

There are pivotal comics in in world.  Ones that change everything.  One such comic is "The Killing Joke".  It is the story of Batman and the Joker. But it is also the story of Barbara Gordon and how everything changed for her in one day.  How Batgirl was no more and paved the way for Oracle.

But take any game changing moment like that and it is ripe for others to want to look at it anew.

The "Brave and the Bold" banner is for various team ups from across the DC line.  One of last year's best was The Brave and the Bold #33, a team up of Z, Wonder Woman and Batgirl (Barbara Gordon).  OR My three top comicbook loves of all time.  Of course it is a powerful piece, but not in the way you expect. 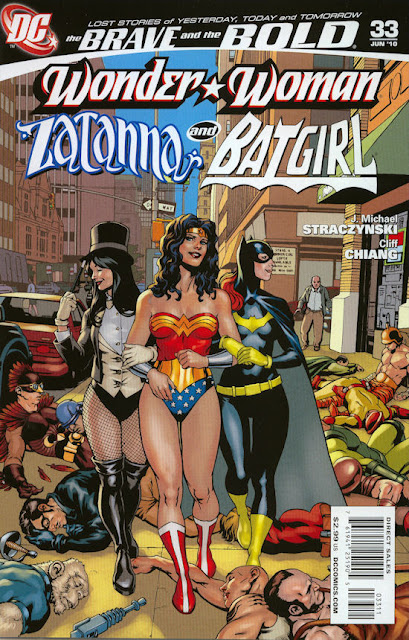 Now I was never a fan of Babylon 5, but I have always sorta liked J. Michael Straczynski as a writer. He has given me reasons not to like him in the past, but this does not disappoint.

It takes place the day before Barbara's shooting and Zatanna has a vision.  We don't know that though.  We just know it Z and WW and they want to take Barbara for a girls night out of dancing.

Obviously if you have not read The Killing Joke then the emotional impact will not be the same, but if you have then...well, you will have to read it for yourself I think. 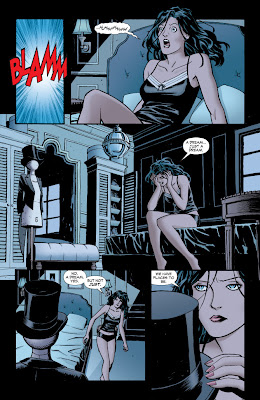 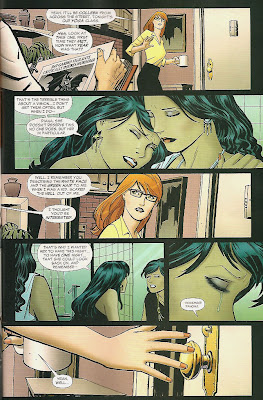 Honestly that is some pretty powerful stuff there.
Close up, http://www.dadsbigplan.com/2010/04/comic-rack-the-brave-and-the-bold-33/

Here are some reviews I found interesting, each having a slightly different take
http://allthiscrap.blogspot.com/2010/04/brave-and-bold-33-ladies-night-review.html
http://www.comicbookresources.com/?page=user_review&id=2155
http://acomicbookblog.com/channel/dc-comics-blog/the-brave-and-the-bold-33-review/

I had no problems with Zee and Wonder Woman not being able to help Babs.  Afterall Zatanna doesn't know when it will all happen anyway and she is sure that if she interferes it will only make things worse.  I also don't have an issue with her precognition; she is magical and weird stuff like that happens sometimes.

Email ThisBlogThis!Share to TwitterShare to FacebookShare to Pinterest
Labels: Comicbooks

Seen these around a number of blogs.  Two covers for Wonder Woman #609.  Hopefully a return to the classic costume. 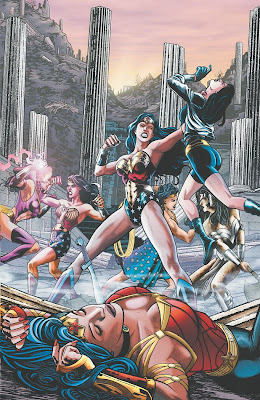 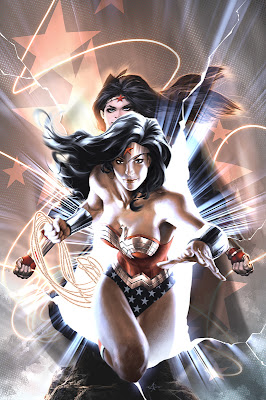 The alternate cover can also be seen over on Alex Garner's Deviant art site, http://alexgarner.deviantart.com/art/Wonder-Woman-No-609-199383452
Posted by Timothy S. Brannan at 4:24 PM No comments: 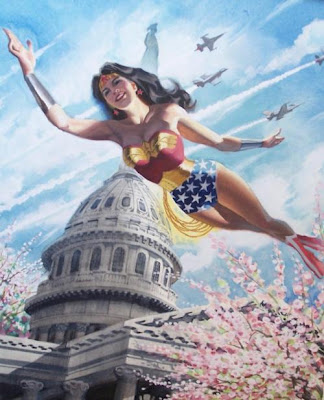